Leipzig/Halle airport is about 30 minutes from the city centre by car. A train connects the airport to Leipzig’s main train station. Trains leave every 30 minutes, driving time is about 15 minutes. The Augustusplatz Campus is within 5 minutes walk from Leipzig’s train station. If there are no direct flights from your city to Leipzig, you can reach Leipzig via Berlin (about one hour train ride from Leipzig), Frankfurt am Main or Hannover (about three/ three and half hours train ride to Leipzig). From these cities, trains frequently depart for Leipzig.

Autobahn A9 (Berlin – München): change at Schkeuditzer Kreuz to A14, exit at Leipzig Mitte to interstate B2, follow directions to Leipzig’s inner city („Zentrum“).

Follow the city’s inner ring until Augustusplatz at the Georgiring. Direct at the Augustusplatz is an underground garage („Tiefgarage Augustusplatz“). The total day costs 5 €. The garage is open for 24 hours. 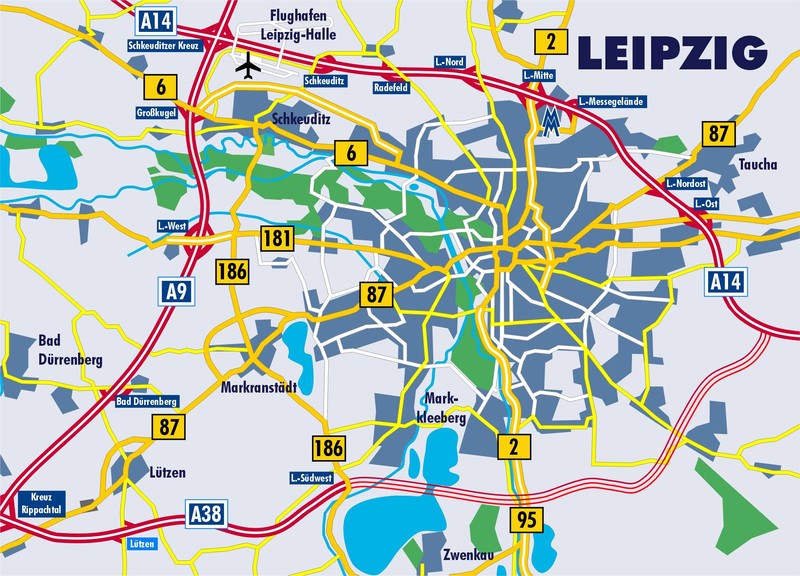 Intercity- and Intercity-Express-trains connect Leipzig to almost all European cities. There is a 5 minutes walk from the train station to the Augustusplatz Campus. Leave the station at its head side, cross the tram station area and walk along Nikolaistraße or Goethestraße.

Leipzig University (Alma mater lipsiensis), Germany’s second oldest university, was founded in 1409 and in 2009 celebrated its 600th anniversary. It was and is a sought-after study destination and has been attracting internationally reputed scholars over the centuries, like the polymath Leibniz, Lessing, Goethe and Heisenberg. As a classical comprehensive university hosting approximately 30,000 students and about 100 study courses, Leipzig University covers the entire scope from natural sciences, law and medicine to diversified humanities courses. As a center of scientific research with about 3000 research projects, the university is a key element of the research landscape of Leipzig among six other universities and almost 20 additional research institutions.

The totally renovated inner-city complex at Augustusplatz (Augustus Square) is the central campus of Leipzig University. The new build Paulinum is reminiscent of the 1968 destroyed university church and symbolize the connection between tradition and modern trend. The modern seminar and lecture hall buildings, the new build Augusteum with its Auditorium Maximum offers best conditions for hosting the BIS 2016.

Lecture Hall Building
The renovated lecture hall building is equipped with twenty-one small, medium and large auditoriums. In addition, it harbors the university computer center and the new branch of the university library, which is open 24 hours a day.

Seminar Building
The seminar building forms the western end of the inner-city campus. It is connected on the north end to the institute building, and on the south end to the new refectory “Mensa am Park”. It accommodates renovated seminar rooms and computer pools.

Institute Building
The new institute building of the university runs along the bustling boulevard leaving Augustusplatz (Grimmaische Straße). While the ground floor offers space to various shops, the upper part of the building comprises the Faculty of Economics and Management and the Information Systems Institute.

Paulinum
The new Paulinum is the intellectual and spiritual center of Leipzig University. The building is architecturally reminiscent of the blasted university church and will serve various purposes. These include university ceremonies, concerts, conferences as well as events from external partners.

Refectory (Mensa am Park)
In the southwest corner of the campus the new refectory underlines the new and modern face of the university. In addition to the actual refectory operation, the prominent building provides a bicycle garage in the basement and houses the offices for the university radio „Radio Mephisto”.

Over the centuries the city of Leipzig and its citizens have made major contributions to the economic and intellectual life in Europe. This special flair of Leipzig can be felt by getting to know its sights. Leipzig attracted famous poets such as Lessing, Klopstock, or Gottsched, and therefore, even the great German poet Johann Wolfgang von Goethe called Leipzig „Little Paris”. In the last hundred years, Leipzig has turned into a city of European dimensions, which has stimulated the development of economy, technology, science and culture. [Source: www.leipzig.de]

All over the world Leipzig is famous for its musicality, mainly deriving from the musicians Bach and Mendelssohn Bartholdy. The St. Thomas Boys Choir, the Gewandhaus Orchestra, many museums and a lively theater scene mark the cultural life of the city. [Source: www.leipzig.de]

In addition Leipzig offers a great nature in the inner and outer city. Considering the rivers and the newly created lakes (Leipziger Neuseenland) Leipzig is now a respectable water city enabling a rich variety of sport activities. And for those who are tired from all the sights, culture and impressions there are interesting offers in the local bar and restaurant areas like Gottschedstraße, Barfußgässchen and along the Karl-Liebknecht-Straße.

Leipzig as a business location
Located in the middle of Europe and equipped with city status and the right to hold markets since 1165, Leipzig has grown to a major center of trade fair. This development came along with the height periods of Leipzig as a commercial city, which was interrupted mainly due to war.

After German reunification, Leipzig succeeded in becoming an important economic center of Saxony. Major production facilities of Porsche and BMW have been established in Leipzig, as well as companies in the IT sector such as Unister Group and the IT service provider Comparex. Furthermore, the public broadcast network „Mitteldeutscher Rundfunk” and many publisher are located here. Leipzig is also a center of the energy industry with energy suppliers (such as the VNG Verbundnetz Gas AG) and the European Energy Exchange (EEX), the largest energy exchange in Continental Europe.

Over the past few years Leipzig has developed into an important logistics site. In 2006 the online retailer Amazon established a huge logistics center. Moreover, since the establishment of DHL’s European air freight hub the airport Leipzig-Halle has grown into one of the most important freight transshipment centers in Europe.
[Source: www.zv.uni-leipzig.de]

Leipzig – a city with unmistakable flair